Hawaii’s capital city of Honolulu is right on the coast and offers miles of beautiful beaches extending both eastward and westward from the downtown area around the island of Oahu. Within a 30-minute drive from the city, beachgoers have a wide variety of beaches to choose from, ranging from highly developed beaches fronted with hotels and condos, like Waikiki Beach or Ala Moana Beach, to relatively raw and unspoiled beaches, like Kailua Beach or the beach beneath Diamond Head. The various types of beaches will appeal to different kinds of visitors. Families with children will enjoy beaches like Waikiki or Magic Island, with roped off swimming and wading areas protected by reefs. Those looking for waves to surf, boogie board, or bodyboard would do better at surfing beaches like Sandy Beach. No matter what water sports you enjoy, find the ideal stretch of coast with our list of the best beaches in the Honolulu area. 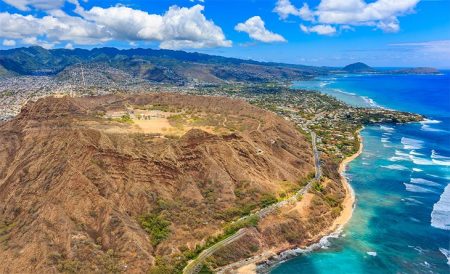 Kailua Beach
Kailua Beach Share:
An easy 30-minute drive from Honolulu, Kailua Beach Park offers a great, natural Hawaiian beach experience. There are three miles of wide, white, soft-sand beach with warm, aqua-blue water. The surf is gentle and good for swimming and wading. The beach area is part of a 35-acre park, which has volleyball, basketball courts, hiking, and other recreational activities. The beach has lifeguards and several areas of facilities (restrooms and outdoor showers). Kailua Beach has good access for kayakers and SUPs (stand-up paddleboards). The little town of Kailua has some cool, local places to eat and shop. About 10 miles northwest, the Paradise Bay Resort Hawaii is a little more rustic than its name implies, but it is right on the beach near Kailua in Kahaluu. 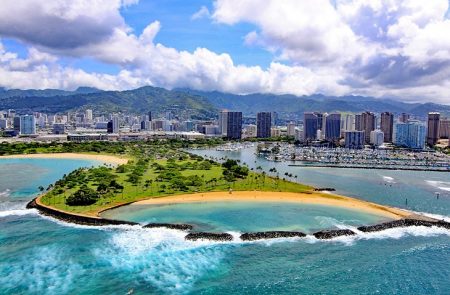 Magic Island
Magic Island Share:
This island is really a man-made peninsula near Waikiki, between Ala Moana Beach Park and the Ala Wai Yacht Harbor. Originally created to be a resort, the entire peninsula is now a park. There’s a nice-sized, gently curving beach at the end of the peninsula, forming a small bay, protected by a man-made reef. The sand is smooth and flat, and the waves are very calm due to the reef. There’s also an unprotected beach on the opposite side from the yacht harbor, but the waves are usually gentle. The interior of the peninsula is a large park, with areas for barbecuing, hiking, and a few sets of restrooms. The beach is also popular for SUPs and kayaking. The Equus, an Ascend Hotel is a short drive from Magic Island, on the other side of a lagoon. This popular boutique hotel delivers a more personal experience than its more famous competitors. 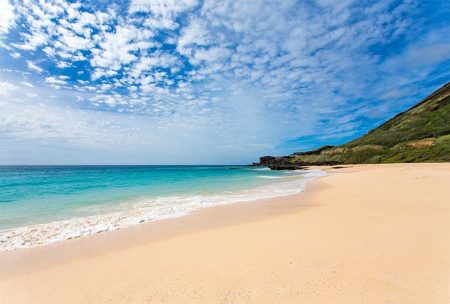 Sandy Beach
Sandy Beach Share:
Sandy Beach is a wide, curving beach located in a residential neighborhood about 40 minutes from downtown Honolulu. Aside from the soft sand, Sandy Beach is a popular place for food trucks to park. It’s also a popular surfing beach, but the large waves (and strong riptides) that draw surfers can make it dangerous for swimmers. The waves break close to shore, and the beach is good for bodysurfing and bodyboarding. There are lifeguards on duty and a few sets of bathrooms and outdoor showers. Off the beach, there are some picnic areas with picnic tables. The Ewa Hotel is about 15 minutes from Sandy Beach, at the end of Waikiki, near the zoo. It’s a well-run, budget property, a five-minute walk from the beach. 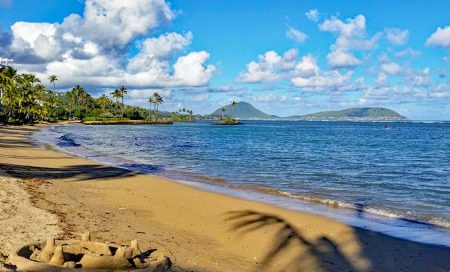 Waialae Beach
Waialae Beach Share:
Waialae Beach Park is a compact, pristine beachfront park in the Kahala area, about 30 minutes from downtown Honolulu. This beach has coarse sand and a rocky shoreline, making some kind of footwear necessary for enjoying the water. There is a strip of white, soft sand at the top of the beach next to the treeline. It can be windy, and the area is popular with windsurfers, but the beach is protected by a reef, so the surf is calm. The water is warm and bright blue. You can also fish from the beach. It’s very picturesque and that makes the area a popular place for weddings. Beyond the sand are plenty of picnic areas and green space. A stay at the Kahala Hotel & Resort puts you about a six-minute walk away. This large resort isn’t new, but it’s right on the beach and has its own dolphin lagoon. 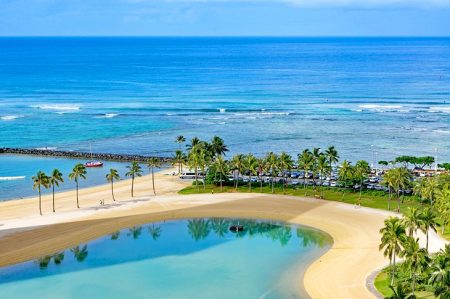 Kahanamoku Beach
Kahanamoku Beach Share:
Waikiki Beach may be big and crowded, but it’s still a great beach. Waikiki is more than two miles long, and it’s made up of smaller, individual beaches. The widest part is an area known as Kahanamoku Beach (named for Duke Kahanamoku, the father of surfing). There’s a beautiful, wide, white-sand beach on one side and a five-acre, man-made lagoon on the other. The beach has gentle waves, and the lagoon has none at all, which makes it great for swimming and stand up paddleboarding. The area is bordered by tall, swaying palm trees. The beach can be crowded, but it’s always possible to find your own spot. Kahanamoku Beach is right in front of the vast Hilton Hawaiian Village Waikiki Beach Resort. 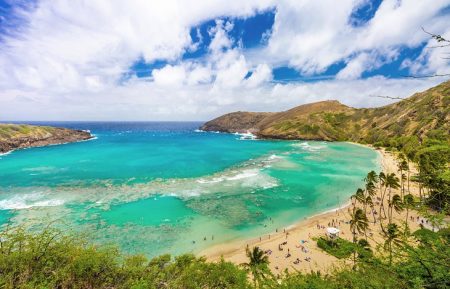 Hanauma Bay
Hanauma Bay Share:
Hanauma Bay is an idyllic, natural bay, formed in an ancient volcano cone. The draw here is more the bay than the beach, as it’s a popular snorkeling spot. The gentle, clear water and abundance of marine life make it like swimming in a giant aquarium. It’s a protected marine life conservation area and underwater park. The beach is wide and flat and there are several areas of restrooms. There’s a snack stand and a place to rent snorkeling gear. This beach has an admission charge and there’s a charge for the shuttle from the parking area (it’s a long walk). Hanauma Bay is about 30 minutes from Waikiki, and many resort hotels offer day trips, which include transportation and snorkeling gear. 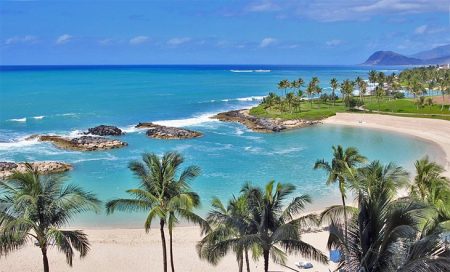 Ko Olina
Ko Olina Share:
Only 30 minutes from Honolulu, this man-made beach resort development offers some beautiful, well-maintained beaches. The area is mainly filled with a few large resorts, but the beach is publicly accessible, with lifeguards, restrooms, and outdoor showers. You also have plenty of dining options as all the resorts have multiple restaurants. The beach has smooth sand and is bright white with light blue water. The main beach lagoon is wide with a gentle curve. The surf here is extremely calm, and it’s a good beach for kids and families. The Marriott Ko Olina Beach Club is right at the center of the curving lagoon. The large resort has multiple pools and multiple dining options.
8 Sans Souci Beach 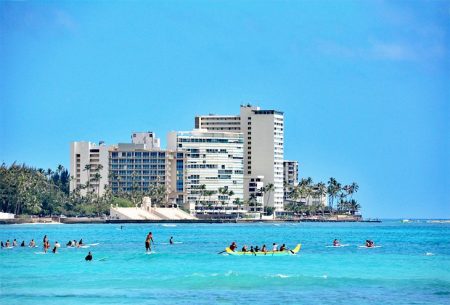 Sans Souci Beach
Sans Souci Beach Share:
Sans Souci Beach (also known as Kaimana Beach), at the far end of Waikiki, is usually not very crowded. It’s mainly popular with locals but is a great place to escape the crowds farther down the beach. Sans Souci is at the end of Waikiki Beach, across from Kapiolani Park, home of the Waikiki Aquarium and the Honolulu Zoo. The compact beach is flat, with soft sand and a single lifeguard tower. The surf is gentle, although there is no protective reef here. The beach has restrooms and outdoor showers and there’s a grassy park area behind the beach. The New Otani Kaimana Beach Hotel is right on the beach. The hotel offers the Japanese brand’s understated luxury and dedication to guest satisfaction. 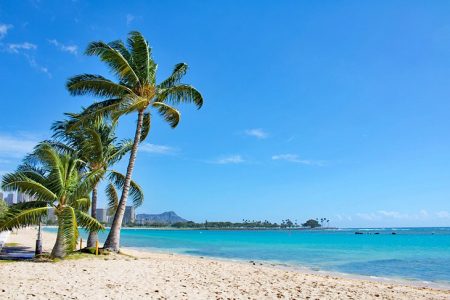 Ala Moana Beach Park
Ala Moana Beach Park Share:
This popular beach is between Waikiki and the downtown area. The area may be better known for the huge shopping mall just across from the beach, but it’s a beautiful, often uncrowded 100-acre beach park. The other draw here is the super-smooth surf, created by a 1,000-foot-long protective reef. It turns the area between the shoreline and the reef into a giant, shallow wading pool, great for small children. It’s a long, flat beach with coarse white sand. There are lifeguards and restroom facilities along the beach, with food concession stands at each end. The park has tennis and basketball courts and is surrounded by a walking/biking path. The Prince Waikiki is a popular luxury resort hotel located across a lagoon from Ala Moana Beach. 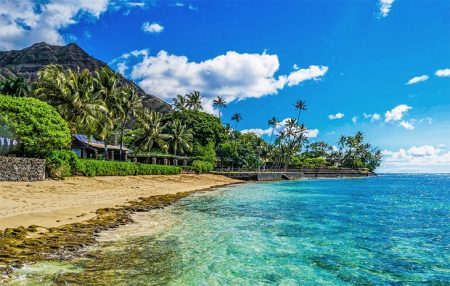 Makalei Beach
Makalei Beach Share:
Makalei Beach Park has an uncrowded, compact, raw stretch of beach, next to Diamond Head Beach Park at the eastern end of Waikiki. It’s not a good swimming beach as there’s a reef right offshore. Unlike some of the other Waikiki beaches, Makalei has plenty of shade from a big banyan tree and the palm trees at the beach edge. Beyond the secluded beach (which is not very wide, especially at high tide) there’s green space with picnic tables and benches. There is no lifeguard and no restrooms. The Park Shore Waikiki hotel is also at the eastern end of Waikiki, near the Honolulu Aquarium. It’s about a mile from Makalei Beach. 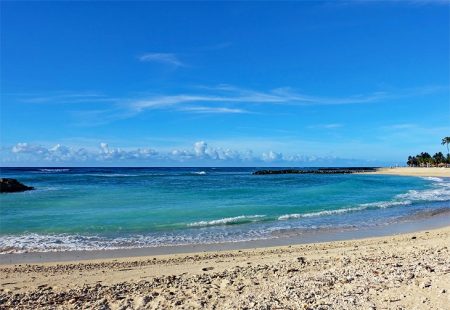 Pu’uloa Beach
Pu’uloa Beach american_rugbier / photo modified Share:
Another city beach park, Pu’uloa Beach Park is to the west of the city, about 25 minutes from the airport. It’s mainly a residential area, and the beach is normally deserted. There are several curved beaches (the area is also called Iroquois Beach), with a large stone jetty in the middle. The beaches are wide and flat, with coarse, tan sand. The water is usually calm, and it’s a good beach for enjoying the sun or swimming. Beyond the beach are picnic areas, barbecues, and a playground. Pu’uloa Beach has no lifeguards, but it does have restrooms.