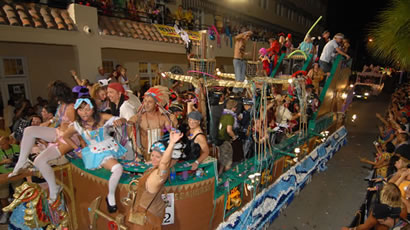 This interesting event is admittedly more flash than substance if booty and booze is what you’re after, especially when you consider that the most popular events at this Player’s paradise are fashion shows, record releases and celebrity basketball. Over 10,000 sun-seeking people attend the five-day hip-hop haven to see the stars from north of the border.

This ten-day free-for-all makes the rest seem pretty innocent in terms of nudity, frivolous titillation, costume parades, and drunken debauchery. The rhythm is definitely going to get to you, as rum pours onto the streets 24 hours a day. The climax hits on the last day of celebrations with a costumed parade along historic Duval Street. Southern silliness meets Eyes Wide Shut as impersonators donning masks and dressing up in outrageous garb let all inhibitions go.

You like fire? Well, the locals of Valencia sure do, as 500,000 people cram the city to watch huge puppets get torched and burn in flames. Prices range from $14 to $200, but book at least three months in advance as pyromaniacs from around the world visit the city for this “hot” event. We would trade in some fire for flesh, but that’s just us.

Over 5,000 people will attend this year’s costume party that will sprawl over 12 bars, showcasing a massive beer garden and an even larger 24-hour casino. Even without the F&F event, Las Vegas is always the place to visit for a good ol’ time.

By far the most celebrated and duplicated drink-fest we know of, the annual beer fest starts midday as Munich’s mayor pulls the first pint after a huge parade through the city’s streets. The local breweries fight for bragging rights by showcasing their massive arsenal. The Hofbrauhaus attracts the rowdiest (i.e. drunkest) masses and the hottest party. Make sure you get there by 10:30 a.m., since waiters only serve those seated (oh, the place is usually packed by 11a.m.). Before you know it, you are reminiscing with your long-lost (or unknown) friend Hans and extolling the virtues of boozing, German-style.

To overcome the challenge of holding a boat race in a dry riverbed, the residents of Alice Springs made a hole in the bottom of the boat, stood inside, lifted the vehicle to thigh-level (similar to women raising their skirts… hmm…) and ran to the finish line. Aided by industrious quantities of cold beer to fuel the crew and crowd alike, the event has grown to attract international teams. If you or your seven friends need any more convincing, keep in mind that American winter is Australian summer.

Spicy dishes, great blues, nonexistent drinking laws, and $2 drinks served 24 hours a day sounds pretty good to any partier. The climax, you guessed it: Mardi Gras, also known as the “International Show Your Boobies” event where you trade in beads for breasts. We could go on and on, but actions speak louder than words.

Rio de Janeiro boasts some of the world’s nicest beachesand finest ladies. Carnival week is second-to-none when it comes to partying. Some would even argue that their lawsencourage boozing. Any way you look at it, like Mecca, every able-bodied male must make a trip to Rio at one point or another in his life.

Some argue that you should save the best for last. We agree. Whether you are a nudist or an eager beaver, the Ponderosa Sun Club is the place to be. A “clothing optional” resort, the website even reminds travelers that “no clothes are tolerated at the pool.” The only other thing that is not tolerated is a camera. Besides that, however, anything goes at the Annual Nudes-A-Poppin’ Pageant where the likes of Jenna Jameson and Ron Jeremy spice it up.