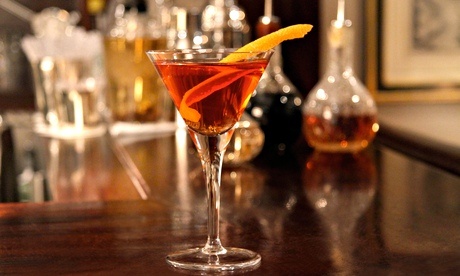 I can picture Alistair Cooke preserved in one of the Dukes Bar’s forest green velvet corner chairs, a chilled martini on the table before him. It’s so well hidden – off St James’s Place, which is off St James’s Street – Dukes is practically a speakeasy. Here the martinis are straight up frozen gin or vodka enlivened with dashes of bespoke vermouth and oil expertly wrung from generous peels of Amalfi lemon by white-jacketed bartenders, led by Alessandro Palazzi. A proper old London establishment, it is neither cheap (at £16-£17 per drink) nor pretentious.
• Martinis from £17, 35 St James’s Place SW1, 020-7491 4840, dukeshotel.com

American Bar at the Savoy 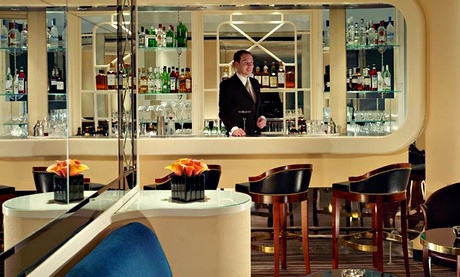 London’s – and the world’s – most famous hotel bar has been a celebrated oasis since the 1900s, when Ada Coleman and then Harry Craddock presided. Ada’s hanky panky cocktail is still a standard. So is Harry’s white lady. The cream and blue room hasn’t changed since the late Queen Mother would stop in for her late morning gin and Dubonnet. (It is harder to imagine Richard Burton, Peter O’Toole and Oliver Reed goading Dudley Moore to commandeer the piano in such tranquil surroundings.) The overspill crowd find their way to the larger, darker Beaufort Bar, on the stage where the Savoy Orpheans and Savoy Havana Band once played. The current bar maestro, Erik Lorincz, has earned the Savoy an impressive stack of recent awards for both drinks and service.
• Cocktails from £15, The Strand WC2, 020-7836 4343, fairmont.com

The Bar at The Dorchester 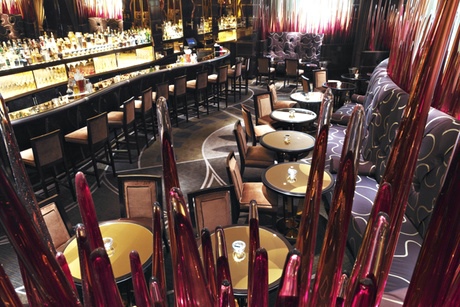 Barman Giuliano Morandin may not have seen daylight in the past few decades. The Bar at The Dorchester is a wonderfully dark drinking hole with a separate entrance on the park side of the hotel – weave past the Lamborghinis and Bugattis. Giuliano is a throwback to an era before bartenders were expected to be master replicators of standardised formulas. He is an artist in suit and tie. Choose a base spirit. Answer a few questions. He will either guide you to the perfect drink or create an as-yet-unnamed classic on the spot. The bar’s kidney-shaped room is lined with handblown sculptures of red glass flames, accentuating the burgundy, dark wood and gold decor. Wherever you sit feels intimate, but it’s not nearly the trysting spot that the downstairs China Tang has become: there, equally outstanding cocktails are made by Luca Cordielli (try his chestnut negroni).
• Cocktails £16, 53 Park Lane W1, 020-7629 8888, dorchestercollection.com 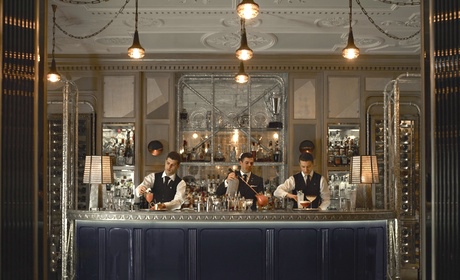 There are two bars in the Connaught Hotel. While the livelier Coburg Bar is lovely and the drinks unimpeachable, make your way to the tiny Connaught Bar, where the decor is reminiscent of an ice cube, and settle in at one of the tiny tables. Ago Perrone and Rusty Cervin will offer you a varied selection of bitters for your martini, which is prepared tableside, and you can get flawless mint juleps, daiquiris and even a charlie chaplin. Not all drinks are shaken or stirred – these bartenders are masters of a long-lost and impressively balletic mixing technique called “throwing”.
• Cocktails from £16, Carlos Place W1, 020-7499 7070, the-connaught.co.uk

Artesian Bar at the Langham 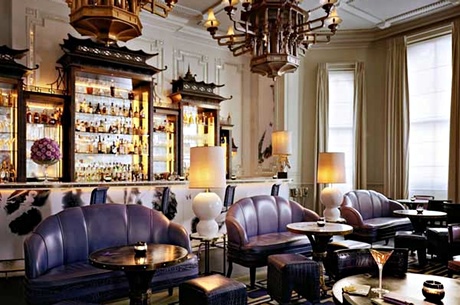 I used to enjoy an IPA or G&T in the Langham’s yellowed and fraying Chukka Bar, so I was reticent about returning after the lobby was renovated and the bar completely reinvented as the Artesian. That resistance evaporated when I met Alex Kretena and Simone Caporale, who have decorated the back bar with recent international awards (it was voted World’s Best Bar 2013 by Drinks International). Both are classically trained and revere the martini and manhattan, but will also take you as far off-piste as you dare go (one rum drink landed in front of me nestled between a pirate’s pistol and a sword; another was aged in leather). The decor is minimalist modern silver and purple, and the drinks themselves take centre stage under pinpoint lights.
• Cocktails from £16.50, 1C Portland Place W1, 020-7636 1000,london.langhamhotels.co.uk

Rivoli Bar at the Ritz 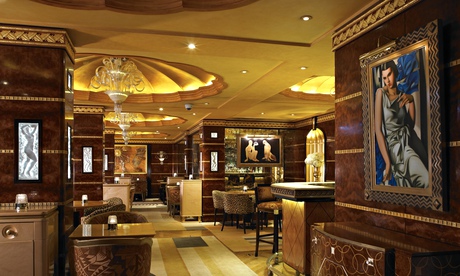 No London bar has undergone such a radical – and to the untrained eye, invisible – transformation in living memory as the Rivoli. This opalescent, gilded jewel box of a room has shed its draconian dress code. Jeans are acceptable. Jackets and ties are optional, as is champagne. The bar staff are now all under 30, white-jacketed and highly creative. The manhattan is made with the bar’s own solera-aged Woodford Reserve whiskey. Its garnish is presented in an ice-filled treasure chest. The ramos gin fizz arrives in a frozen goose egg shell set in a spun sugar nest atop a footed glass stand. These liquid fantasies are also flawless classics, with all the magic the room deserves. Feeling flush? Try one of their once-in-a-lifetime vintage cocktails (up to £350 for a presidente).
• Cocktails £19, 150 Piccadilly W1, 020-7493 8181, theritzlondon.com 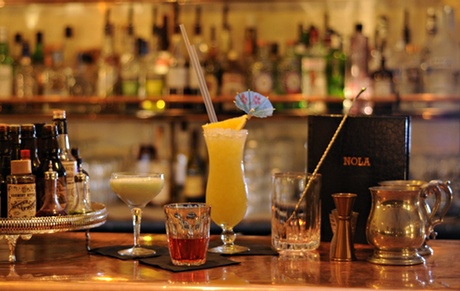 At this new New Orleans-inspired bar, the top-selling cocktails are the hurricane, the sazerac and – a personal favourite – the grasshopper, which was created a stone’s throw from the Mississippi river at Tujague’s by the owner Philibert Guichet around 1919. Not every cocktail has to be intensely alcoholic and balanced with bitters: the grasshopper is like a green and creamy pudding in a coupette glass. The New Orleans Culinary and Cultural Preservation Society bestowed the Seal of the Sazerac on this bar, the first outside North America to receive the honour. It’s very casual, with a 65-person capacity, slow-spinning ceiling fans, high-backed booths, and French cafe tables that are ubiquitous in the Crescent City. A solid copper bar top is accented by copper pipes supporting the back bar. There is a cigar terrace and humidor in the back. The cigars are best taken with a sazerac.
• Cocktails around £10, 66-68 Rivington Street EC2, nola-london.com 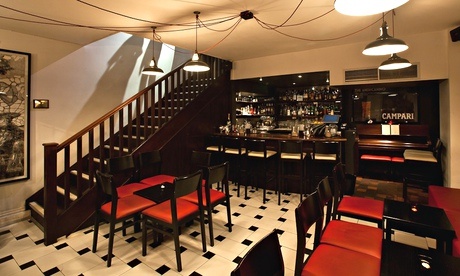 Created by London’s mad cocktail scientist Tony Conigliaro, 69 Colebrooke Row is a diminutive corner bar on an Islington side street near Angel tube station. It was originally saddled with a challenging moniker: The Bar With No Name, and Tony will still smile if you use it. He and his team turn out negronis and 50-50s (martinis with equal parts gin and dry vermouth). The glasses are not large but the prices reflect this, so you can order a second one and both will be cold all the way to the bottom. The black-and-white decor is a subtle nod to Federico Fellini, and each evening inexorably wends its way into Fellini-esque reverie.
• House cocktails £9.50, 69 Colebrooke Row N1, 07540 528593,69colebrookerow.com 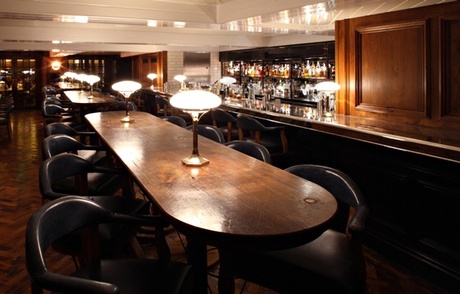 The oak-panelled basement bar in the Hawksmoor at Seven Dials in Covent Garden doubles as waiting area for this sprawling subterranean steakhouse. It is reminiscent of scores of old New York steakhouse bars, although here – in addition to great old standards – you’ll find a new drink that should not be missed: the ginger brew. This frosted mug of gin, ginger, citrus and Fuller’s London Pride bitter – created by former Hawksmoor bartender “Shaky” Pete Jeary – is bound to become a classic.
• Most cocktails £9-£9.50, 11 Langley St WC, 020-7420 9390, thehawksmoor.com 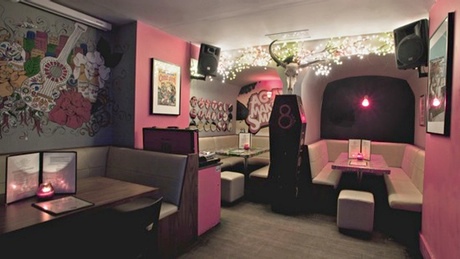 Next door to a Soho sex shop, El Camion may seem the unlikeliest destination for great drinks but it boasts one of the world’s top mixologists. Dick Bradsell is considered the father of modern British bartending and trained a generation of London’s best bar staff. Now he is training another in the Pink Chihuahua, a members’ club underneath the restaurant, and at the new bar within the restaurant itself. While the margaritas are outstanding in this casual, inexpensive Mexican roadhouse, try a bramble or espresso martini. The best of the new British classics, they were both invented by Bradsell.
• Cocktails around the £8, 25-27 Brewer Street W1, 020-7734 7711,elcamion.co.uk